We’re not perfect. We have never been perfect.

But the great thing about this country is our drive.

Sure, we make mistakes. But America has the desire — and strength — to do better.

Saturday’s SpaceX launch brought us together when we needed it the most. It ignited our sense of adventure.

And it was a true launch of America 2.0.

If you’re having a hard time staying positive or you need a glimpse of America united to shoot for the stars, watch today’s Market Talk.

See how we will overcome these trials to make our country stronger than ever: 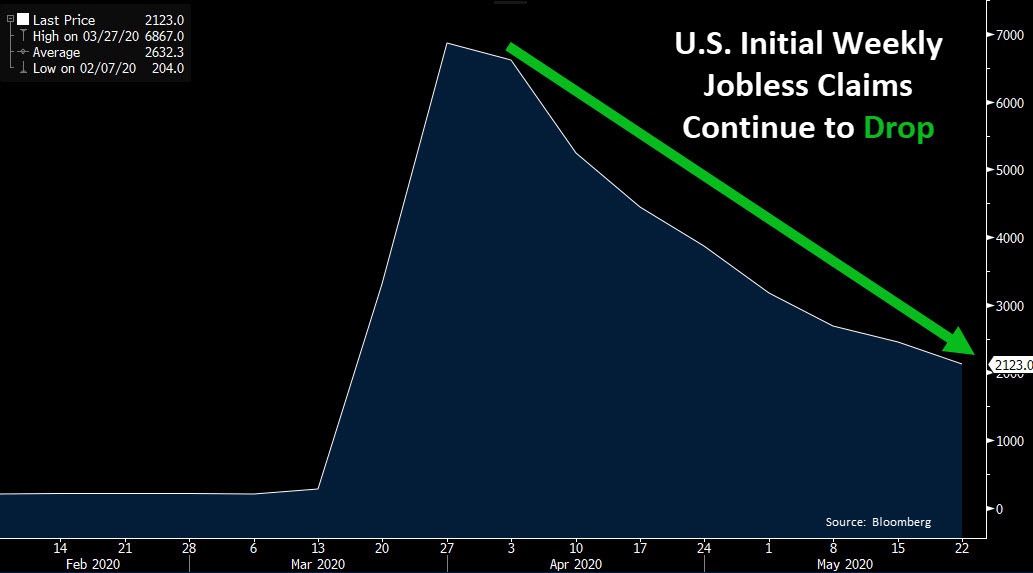 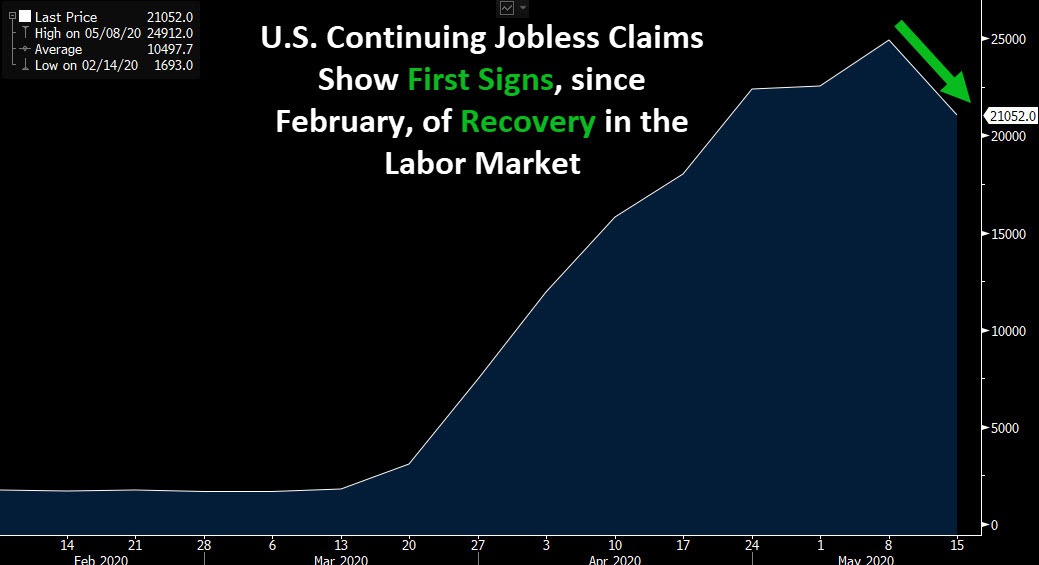 It signifies the first signs of recovery in the U.S. labor market as states reduce quarantine restrictions and businesses begin to reopen. These are all encouraging signs. We also saw an encouraging drop in continuing claims because analysts were predicting an increase.

Turning to the housing front, recent mortgage applications defied forecasts and rebounded an impressive 54% since April, the highest reading since January. Per the Mortgage Bankers Association, home price applications climbed another 9% in the week ended May 22. This is the sixth weekly straight advance in this index. 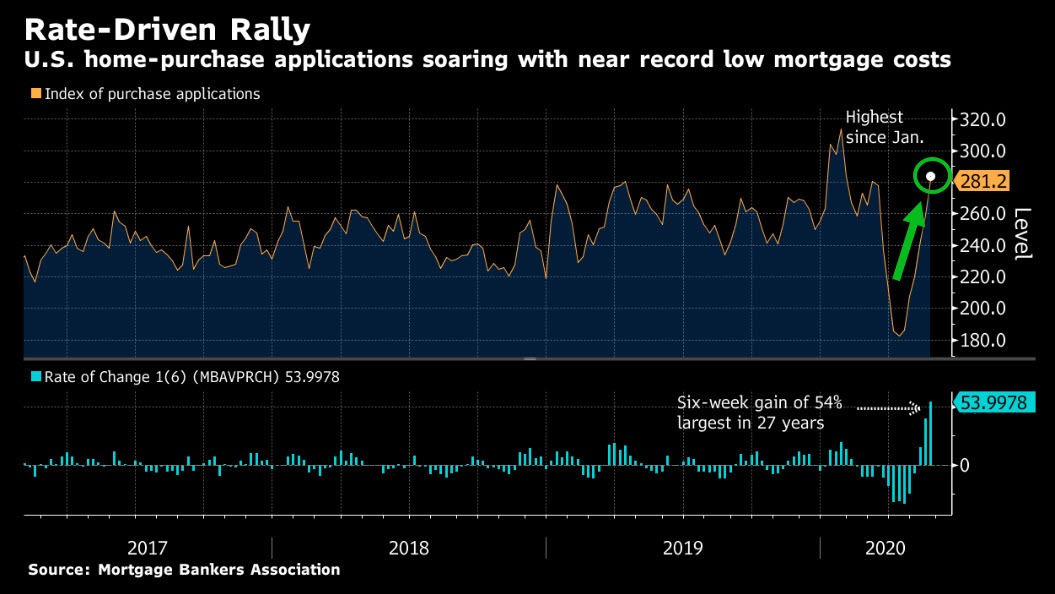 Realtor magazine puts it this way: “Homebuyers are entering the market at a much brisker pace than many economists forecast.” 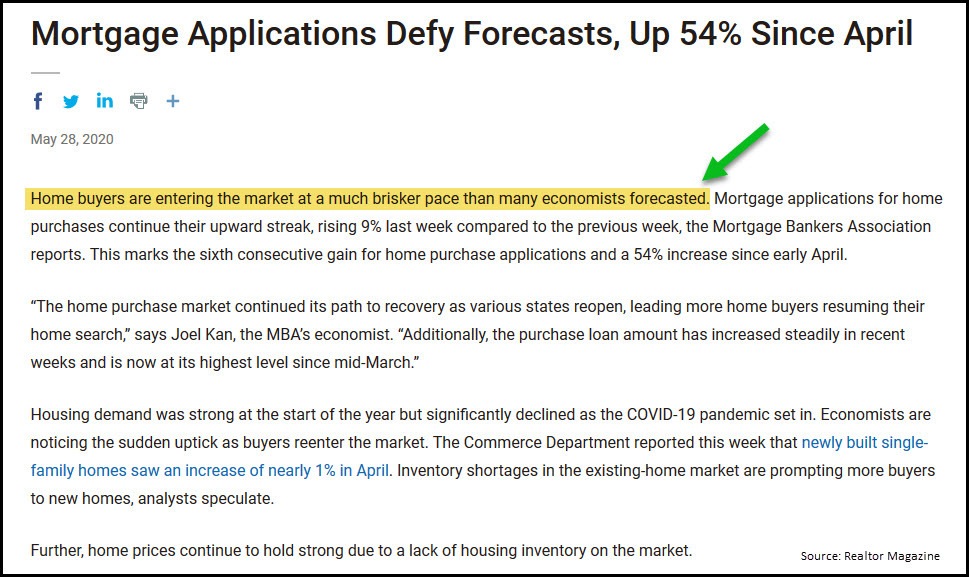 The Self-Driving Revolution Continues to Ramp Up

Per Engadget, Waymo’s self-driving van will continue to “return to the Bay area streets on June 8. Waymo’s plans to resume self-driving operations will extend to the San Francisco area.

“The company isn’t carrying passengers, but they will instead carry charitable delivery support to community partners, which will include art kits for local children and service Lighthouse for the Blind and Visually Impaired.” 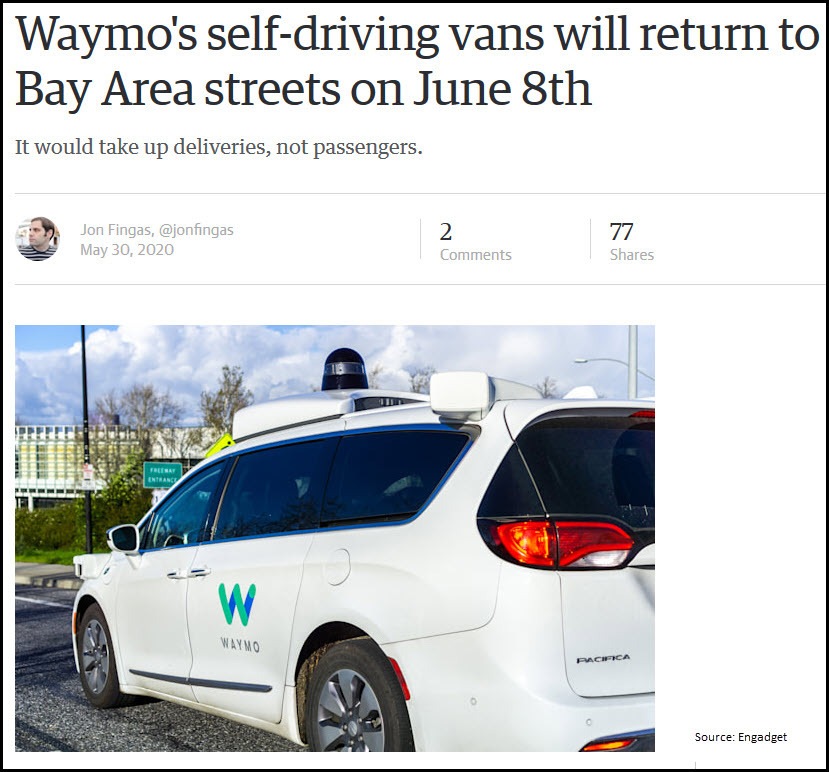 Finally, in our America 2.0 update, things are firing on all cylinders for Elon Musk’s suite of companies. From SpaceX’s extraordinary human space flight launch on Saturday to Tesla’s new Model Y success. Speaking of the Model Y, Electrek is reporting that Tesla has drastically accelerated the delivery of the new Model Y. 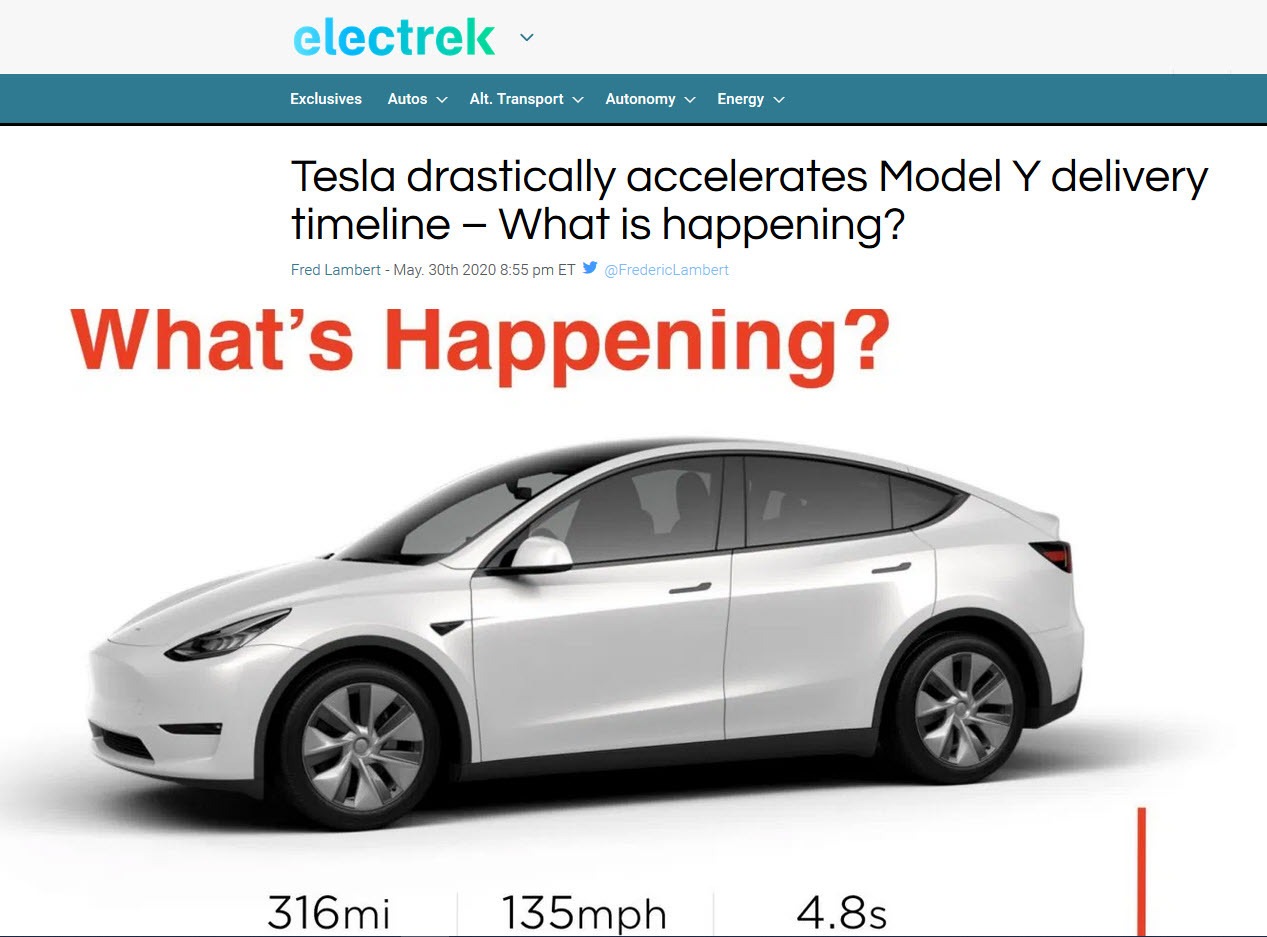 It was initially set at an 8- to 12-week timeframe for deliveries. Guess what? Now it’s just four to eight weeks. As one Electrek commenter aptly noted on the article, “my observations lead me to believe that they are shipping cars faster than they have been many months in the last year. People likely to buy a Tesla are still fully employed, possibly making more money than before and likely spending less right now without eating out. There should still be a decent market for Tesla going forward.”

America is once again shooting for the stars. I have to say I was amazed, inspired and thrilled to see it. I have been talking to my kids about it. I’m sure our juniors in the Strong Hands Nation and kids I talk to are incredibly excited about space and Elon Musk’s goal to setup a lunar base.

This is something that, as a country, I believe we have missed. We have missed that sense of adventure. It’s a fantastic accomplishment for SpaceX, for NASA and our country. In many ways, it is the launch moment for America 2.0. I have gotten some tweets from people who say,

“How do you contrast your bullishness, your optimism and positivity with what you are seeing on the television? Why are you still positive about the stock market?” I’m just going to say a few things. Our country has never been perfect. People in our country have done many things wrong over time.

I would tell you that from my experience keeping a calm head and going through this like we have the pandemic, the crash associated with it, recession fears and any number of other fears we have dealt with over the four years I have been at Banyan Hill and since we’ve had Profits Unlimited and our various publications is the way to go.

I tweeted back in return to someone who wrote me and said that I believe focusing on what is good, what is right, what is optimistic and positive helps. I believe that good overcomes evil. That is a basic way that I go through my life. I believe that’s a good way to go through it.

If you look at our country, we have overcome a great deal. There is a great deal more to overcome in many number of fields. However, it is still cause that when we do something phenomenal that so many people have been working so hard for to recognize their achievement and celebrate it.

Even though it may be unwelcome and controversial, I want to say I am still bullish, I am still optimistic and I am still positive for our country. I am still BOP on America 2.0.

If you own our stocks and you are in the stock market, stay in. I understand you might feel uneasy about what you are seeing in the media versus anything we are saying. Just remember, we have gone through many of these things before and we overcome.

We get through these things and we push through on the other side. That is the story of our country. I want to say again, I am still bullish, I am still optimistic and still positive.