Fintech, short for financial technology, is tech that automates and improves on monetary transactions and financial services, largely through mobile or digital applications.

Think of it as the next evolution of banking, credit, printed money and coins.

Everyone from consumers to business owners to entire industries have embraced fintech because it offers a better, safer and cheaper way to manage finances.

Fintech increasingly gives big banks and investment services a run for their money. It’s also been embraced in a big way by the largest U.S. generation in history — millennials.

In general, fintech applies to any innovation in how people do business involving monetary transactions.

The earliest forms of fintech over the past 20 years were propriety devices used in back-end bookkeeping systems of established financial institutions.

But as the Internet of Things took off, more consumer-oriented services, retail operations and business models have embraced it.

As a result, fintech’s now in use in retail stores, banking, fundraising efforts, educational services, nonprofit organizations and investment management.

This explosive growth is likely due to the popularity of internet-enabled smartphones and tablets expanding its applications beyond computer-to-computer transactions.

It encompasses everything from money transfers and mobile check deposits, to making retail or online purchases, to raising money for a business startup, to managing investments without human assistance.

Fintech also includes bitcoin and other cryptocurrencies, as well as digital money apps such as Apple Pay, PayPal, Venmo and Square.

About one in three American consumers now utilize at least two or more fintech services and those numbers are growing.

Because fintech is disrupting traditional financial operations, it’s a key mega trend driving what Paul Mampilly calls America 2.0 — or the Fourth Industrial Revolution — which is remaking the way we live, work and play, and transforming countless industries in the U.S. and around the world. 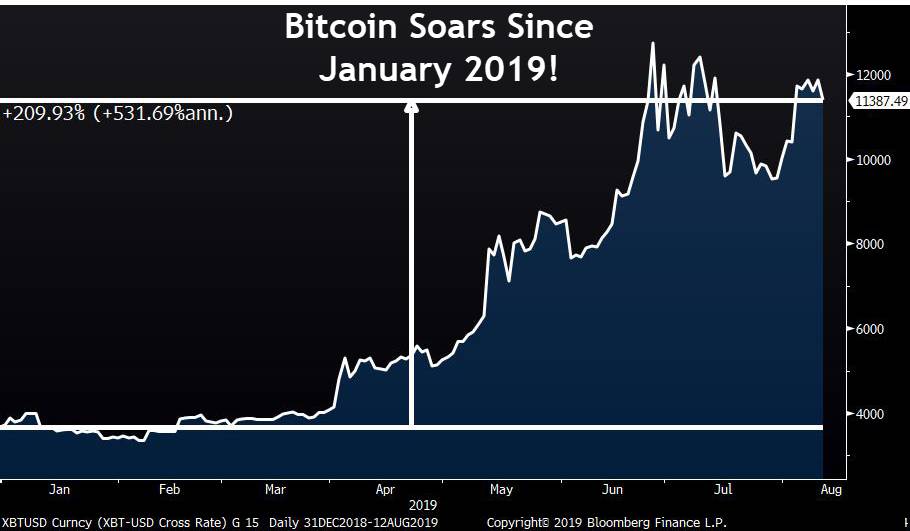 A new study of millennial money habits found that:


What Are Some Examples of Fintech?

There are countless examples of how fintech is reshaping the world of money, commerce and financial services, but they all fall into three primary categories: new tech (such as apps) that allow for monetary transactions online, “digital money” (such as bitcoin) which is a blockchain technology-based alternative to cash and the IoT-enabled credit and loan services (which are replacing traditional banking services).

The IoT-enabled apps such as PayPay, Venmo and Square Cash are perhaps the most visible ways that new technology is allowing for easier, cheaper and faster monetary transactions than banking services, credit cards and wire services.

PayPal Holdings Inc. was one of the first companies to capitalize on the digital-money trend, recognizing its appeal to younger Americans.

Today, PayPal has 267 million active consumer accounts — 17% more than just a year ago and a figure the company expects to hit 300 million this year. The average customer uses it at least three times a month.

And about 21 million merchants have PayPal accounts, with roughly half of North American retailers accepting it as a payment method.

That trend is only likely to continue.

But while PayPal’s fortunes are soaring, blockchain technology is poised to boost fintech applications to new heights in the years ahead. Already, blockchain is creating superstar stocks out of bitcoin, lumens and other crypto-currency that use it. Examples:

Cryptocurrency and digital cash such as bitcoin and lumens are becoming the new “digital gold” — offering a safer, readily accessible option for buyers and sellers than cash, credit cards, checks or other payment sources. Bitcoin, in particular, has been on a tear. After hitting bottom in late 2018, at about $3,500, it rose to nearly $14,000 by the end of 2019. Paul Mampilly predicts bitcoin will continue rising, and will hit an all-time high of $50,000 by the end of 2020. By 2025: $250,000.


Which Companies Are at the Center of Fintech?


What Are Fintech’s Global Market Projections?

In North America alone, the fintech market is projected to be a $80.85 billion industry by 2023. But fintech is growing fastest in the Asia-Pacific region — China, India, Japan, South Korea and Australia — where the market will rise every year by 43.34% over the next four years. 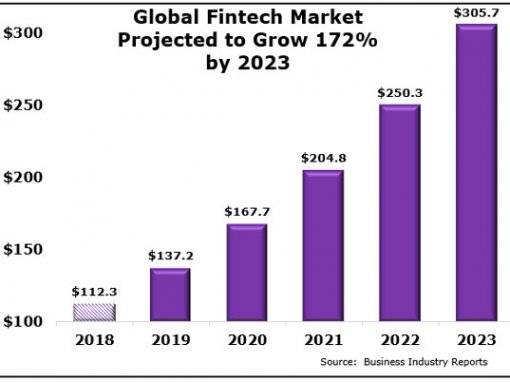 In fact, an index comprised of only 10 publicly traded fintech companies is already outperforming the S&P 500.

Because banks are so invested in implementing technology solutions in their daily operations, fintech is estimated to rise 22.1% every year and hit $305 billion by 2023.

What all this adds up to is a financial revolution that will transform the nation’s and the world’s monetary systems in ways that rival the first uses of coinage and paper currency hundreds of years ago.

Financial technology will help usher in what Paul Mampilly calls America 2.0 — along with a handful of other tech-based innovations that will remake the U.S. economy and have ripple effects around the globe.

To understand how these groundbreaking mega trends will help usher in a new age — in money, technology, entertainment, health care and other fields — and make early investors rich in the process, click here.

Visa. American Express. Discover … beware! Fintech is coming for you! There’s a rising new market in the fintech IPO world called BNPL — buy now, pay later. In a way, BNPL is a modern take on the credit card. It’s one of the fastest-growing fintech trends among...